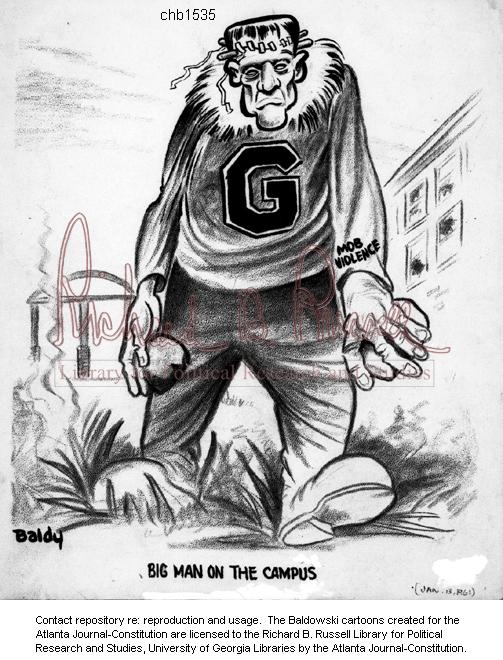 William Tate (1903-1980) was the Dean of Men, University of Georgia, 1946-1971. The materials in this collection document events surrounding the desegregation of the University of Georgia in January 1961. The clippings, legislative reports, petitions, and correspondence that comprise the collection serve as both a record of the steps involved in desegregating the University and the span of public opinion--both local and nationwide--on the events at the time. Dean Tate's role in overseeing and responding to student conduct in the aftermath of desegregation is a major topic of the collection.

Omer Clyde "O.C" Aderhold (1899-1969) was president of the University of Georgia from 1950 to 1967. The collection documents the administrative business of the University of Georgia during O.C. Aderhold's tenure as president. Materials of particular interest are those documenting the desegregation of the university in January 1961 when Charlayne Hunter-Gault and Hamilton Holmes became the first two African American students to attend UGA. These files include administrative correspondence as well as letters from the public expressing support or opposition to desegregation.

The Civil Rights Digital Library Initiative represents one of the most ambitious and comprehensive efforts to date to deliver educational content on the Civil Rights Movement via the Web. The struggle for racial equality in the 1950s and 1960s is among the most far-reaching social movements in the nation's history, and it represents a crucial step in the evolution of American democracy.

The Footsoldier Project for Civil Rights at the University of Georgia

The Foot Soldier Project for Civil Rights Studies and Research seeks to establish an archival and documentary research infrastructure for studying, disseminating, and preserving information and scholarship on the civil rights movement, social justice and reform, and policy-related issues. Its aim is to advance civil rights scholarship while contributing more broadly to enhancing local and national discourses on diversity and equity.

The Red and Black: An Archive of the University of Georgia's Student Newspaper

The Red and Black debuted in 1893 with a front page devoted to Georgia’s game with the “burley” Vanderbilt football team and reporting, “Fine Playing by Our Team Despite the Score.” Turning inside, the disappointed fan of 1893 found the student editorial staff affirming that the new paper would be “devoted to matters of interest to the students and friends of the University.” Such has been the objective of the Red and Black, first as a University of Georgia publication and, since 1980, as an entirely independent publication aiming to, “provide a training ground for students interested in gaining experience in various aspects of newspaper publishing and to produce a high quality daily newspaper for the University of Georgia community.”

The Clifford H. (Baldy) Baldowski Editorial Cartoons at the Richard B. Russell Library for Political Research and Studies contains 6,740 pen and ink drawings and 2,460 velox. The digital database contains approximately 2,600 cartoons from the collection. Clifford H. Baldowski, known by the pen-name "Baldy," depicted the local, national, and international news of his day in the editorial pages of the Augusta Chronicle, Miami Herald, and Atlanta Constitution. His work is a rich source of information for those studying political reorganization in Georgia and the growth of Atlanta as well as the Civil Rights Movement, the Cold War, the Vietnam conflict, Middle East tensions, and Watergate.

The Georgia State University Library provides digital access to photographs of UGA taken by the Atlanta Journal Constitution during desegregation.