About: The mission of the University of Georgia Special Collections Libraries is to acquire, organize, preserve, and provide access to unique and rare materials related to the history and culture of Georgia. The Richard B. Russell Jr. Special Collections Libraries Building houses the Hargrett Rare Book and Manuscript Library, including University Archives, the Richard B. Russell Jr. Library for Political Research and Studies, and the Walter J. Brown Media Archives and Peabody Awards Collection.

Southern states were critical to the war effort during World War II (1941-45) and none more so than Georgia. Some 320,000 Georgians served in the U.S. Armed Forces during World War II, and countless others found employment in burgeoning wartime industries. Their experiences were pivotal in determining the state's future development, and the war itself marked a watershed in Georgia's history. Because it occurred when important shifts in the state's politics, race relations, and economy were already underway, the war accelerated Georgia's modernization, thereby lifting it out of the Great Depression and ushering it into the mainstream of American life. 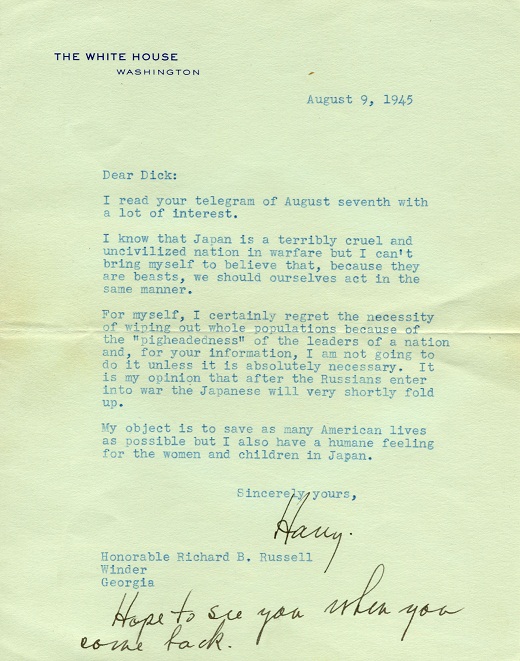 Letter from President Harry Truman to Sen. Richard B. Russell, Jr., regarding the bombing of Japan. 9 August 1945