Guide to Women's Collections at the Richard B. Russell Library: Elected Officials

The Elected Officials guide highlights women who were elected to local, state, and national government positions, from mayor to United States Congress. 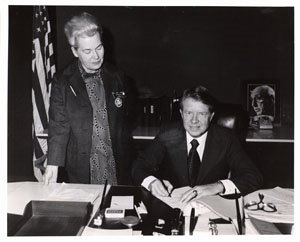 The Iris F. Blitch Papers document her two terms representing Georgia's Eighth District in the United States Congress from 1955 to 1963, and, to a lesser extent her campaigns and personal life. The majority of the collection consists of correspondence, newspaper clippings, legislative bills, research and campaign materials, scrapbooks and photographs. Well-documented throughout the entire collection, particularly in the Legislative and Subject Series, are the issues that were important to Blitch and to the twenty counties that composed the Eighth District, including agriculture and environmental issues. Bills sponsored or supported by Blitch include: Okefenokee Conservation Bill (secured funding for water conservation and fire protection in and around the swamp); Small-Watershed Bill (allowed the building of small watershed projects with government grants and loans to conserve water for farmers, municipalities, industry, recreation and the conservation of fish and wildlife); Water Pollution Bill; forestry development; anti-subversive activities; improved drug laws; livestock sales; and benefits to beekeepers, among others. Additionally, the papers provide insight into the political climate for women in the second half of the 1950s and the early 1960s as well as into social mores regarding their participation. Blitch's personal beliefs and opinions regarding women's roles and responsibilities in government and politics are evident in the speeches and interviews she gave throughout her career. To a lesser extent, and primarily through correspondence found in the Personal Series, is information relating to her immediate and extended family as well as her fragile health, which ultimately forced her retirement in 1963. Correspondents include the following prominent Georgians: D. W. Brooks, Phil Campbell, John Flynt, Jr., E. L. Forrester, Ed Friend, Henderson Lanham, Herman Talmadge, John Pilcher, Prince Preston, and Richard B. Russell, Jr.

Cardee Kilpatrick served Athens, Georgia, as a member of the Clarke County Board of Education (1979-1984), the Athens City Council (1986-1990) and the Athens-Clarke County Commission (1990-2004). Her papers include correspondence, planning documents, campaign materials, speeches, news clippings, photographs and artifacts.

Joan Haddad Saliba was the first woman to become mayor of Hartwell, Georgia. She was born in 1928 in Chicago. Ms. Saliba served on the city council of Hartwell during the 1970s, and in 1981 was elected mayor in a special election. She was an advocate for Hartwell's historic sites and was also successful in obtaining federal and state grants to spur further development of the city. This collection is a scrapbook of Mayor Saliba's career, including photographs, newspaper clippings, some campaign materials, and personal correspondence with other prominent Georgians--including President Jimmy Carter, Governors Joy Frank Harris and Roy Barnes, and then-Lieutenant Governor Zell Miller. The collection also contains seven promotional videos for the City of Hartwell that feature Mayor Saliba.

Gwen Ingram O'Looney served as the mayor of the Unified Government of Athens-Clarke County (1991-1998). Her papers document her service as a member of the Athens City Council and mayor, her political campaigns and activities, and her community engagement as well as the issues facing Athens-Clarke County during the 1980s and 1990s, such as increased growth, historic preservation and the impact of industry. Included are notebooks and journals, speech notes, datebooks, correspondence, campaign and political materials, clippings, programs, and photographs.

The M. Louise McBee Papers documents the political activities of Louise McBee who served as a democratic legislator in the House of Representatives from 1991 until 2004. Prior to serving as a legislator for Athens-Clarke County, McBee was an educator and held administrative positions at the University of Georgia from 1963 until 1988. At UGA, Dr. McBee held positions as: the Dean of Women, the Dean of Students, the Assistant Vice President for Instruction, and the Vice President of Academic Affairs. This collection includes records of McBee’s activities as a legislator. Records include correspondence and research files as well as files relating to different legislative committees McBee served on. Topics covered in this collection includes: the HOPE scholarship, higher education, Teachers’ Retirement System, Gay Marriage Amendment, Georgia World Congress Center, transportation, and issues relating to Athens-Clarke County. This collection also includes some personal files, photographs, and artifacts. Her oral history can be found here.

The Jacquelyn H. Barrett Papers document her career as the first African-American Sheriff in the United States. Barrett was Sheriff of Fulton County where she managed the operation of Georgia’s largest Sheriff’s Department and oversaw the operations of the Fulton County Jail. The papers include speech and event files, policy and procedural manuals, photographs, reports, campaign files, schedules, and plaques and awards.

The Birdie Bryan Miller Papers document Miller’s life and career in Young Harris, Georgia, where she taught at Young Harris College and was active in local politics, including twice serving as mayor of the town and sitting on the city council. The collection includes personal files that consist of clippings, correspondence, and civic records as well as certificates, clippings and campaign material pertaining to her son, former Georgia Governor and United States Senator Zell Miller. The collection also includes items that belonged to her late husband, Stephen Grady Miller, including his diplomas from Young Harris College and King’s College of the University of London, postcards and photographs from his service in World War I, and material from his time in the Georgia State Senate in the 1927-1928 session.

Jeannette Rankin was the first woman elected to the United States Congress and was noted for her campaigning for women's suffrage and pacifism. Her papers document her congressional and activist career and include correspondence, writings, and subject files.

Janet B. Scarborough Merritt was elected to represent the Sumter County (at the time, the 68th district) in the Georgia State House in 1964. The only woman in the Georgia State House of Representatives when she was elected, and the first to represent Sumter County, Merritt called herself a “full-time” representative. The topic of the role of women in government is thoroughly documented throughout Merritt’s speeches and writings. She served four terms in that position: she was elected again in 1966, in 1968 (after reapportionment combined Sumter with Macon and Schley counties into the new 46th district), and in 1970. In 1972, after a second reapportionment, Merritt was defeated for re-election by her former colleague in the House, Oliver Oxford, in a run-off. Merritt ran against Oxford a second time in the 1974 election, but was again narrowly defeated in a run-off. The collection documents Merritt’s campaigns, her time in the state legislature and her community activities including heavy involvement in the Daughters of the American Revolution (D.A.R.) Of particular note are materials documenting Merritt’s ongoing battle to change Georgia’s state flag. In 1969, Merritt sponsored a bill to change the Georgia flag adopted in 1955, shortly after the Brown v. Board of Education Supreme Court ruling, back to the 1879 version, which did not include the Confederate battle flag. Included in the collection are speeches, notes, journals, correspondence, clippings, photographs, artifacts, and audiovisual material.

Jane Brevard Vandiver Kidd was born in 1953 in Atlanta, Georgia, and is the daughter of former Governor S. Ernest Vandiver (1959-1963) and grand-niece of Senator Richard B. Russell, Jr. In 1975, she graduated from the University of Georgia’s Grady College of Journalism, and in 1980 she won a seat on the Lavonia, Georgia city council, which she retained for three terms. In 1992, she managed Don Johnson’s successful campaign for Congress. She went on to represent the 115th District in the Georgia House of Representatives from 2004-2006. After her term in office, she served as chair of the Democratic Party of Georgia from 2007 to 2011. This collection contains legislative records from Kidd's time in the Georgia Assembly, campaign files, and materials documenting her tenure as chairwoman of the Democratic Party of Georgia from 2007 to 2011. It also includes records from her time as a public information consultant for MIDMAC, the MacArthur Foundation Research Network on Successful Midlife Development, as well as some personal and family records  Her oral history can be found here. 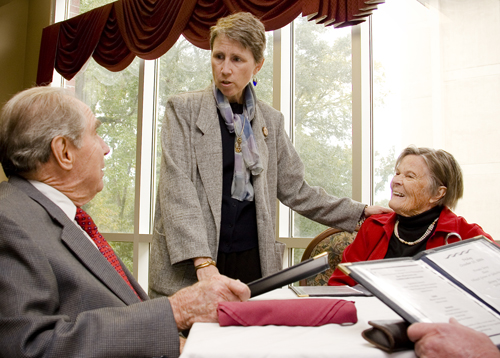 The Heidi Davison Papers document Davison's time as Mayor of Athens, Georgia,from 2003-2011. The collection contains official paperwork, correspondence, and artifacts related to Athens-Clarke County Unified Government, the Mayor, and the Commission. Other topics include city planning and development, environmental and public health initiatives, and economic development.